At the approach of the inaugural of his mandate, Donald Trump gives signs of change onto the whole American policy. No without causing tensions from everywhere with his all-out statements.

The hour of the nomination approaches for Donald Trump. Elected only thanks to the presidential electors on November 8th, the tycoon of the real estate is going to become the 45th president of the United States. And seen the image which he gave of him during the election campaign in the face of Hillary Clinton, he shows itself more splitting that his predecessor, Barack Obama, who benefits from an important aura, in particular in mass media. Which sweetens a balance sheet of eight years in the power nevertheless well contrasted.

What characterizes Trump these last months, it is its capacity to be provocative with the media, that make him to him good. The multiple pans of the billionaire were spread in several newspapers such the Washington Post, the New York Times, CNN or BuzzFeed, to indicate to the readers how much this character is not hardly reliable to assure the power of the first world power - how long still? - for four years. In reply, Trump accuses them of wanting to deceive people because they would be representative of the system which it would be necessary to fight. But as Trump is also a member of it and as he plays it as he pleases, it would be funny if it was not question of his presence in the Oval Office of the White House.

His provocations with mass media could stop only at this level, but the diplomacy is also concerned. Naturally, for months, the observers call back indefatigably the links between Trump and Russia. Which allows at least to anticipate a change of paradigm in the diplomacy of Washington, a traditional distrust towards Moscow since the cold war. Moreover, secret services (FBI, CIA, NSA, etc.) do not hide their opposition with regard to the line of the new president and moreover, the CIA chief is outrageous by Donald Trump's comparison of the intelligence community to Nazi Germany (cf link n°1). Other provocation on behalf of Trump, it is David Friedman's naming, known to defend the colonial policy of the Israeli power in the West Bank, as ambassador of the United States in Israel. And it is true especially as during his nomination, the new president should announce the movement of the embassy from Tel Aviv (recognized capital at the international level) to Jerusalem, arousing the concern of the colonized Palestinians and other powers (cf link n°2). Nevertheless, he can make even more for Benyamin Netanyahou? Not sure, seen the abstention of the United States during an UN Resolution on December 23rd of this year on the Israeli colonization in the West Bank.

But the biggest provocation on behalf of Trump is sent in China, which looks like to be an enemy for him. And that passes by Taiwan. Last December, Trump exchanged phone calls to the president of the island, Tsai Ing-wen, letting appear the idea of a recognition of Taiwan as a sovereign State in the eyes of the uncle Sam, giving up de facto "One China policy". What would indicate a complete reversal of the policy of the United States towards China, what improved in the course of decades. In any case, the words of Trump on Taiwan please not at all the authorities of Beijing, which would be ready of throwing threats towards Washington on this island claimed by the People's Republic of China since 1949 and the victory of the Chinese communists, around Mao Zedong, on the nationalists of Chiang Kai-shek (cf link n°3).

Finally, the big objective of Trump, during his mandate, if he is not reelected in 2020 - hypothesis to be taken into account-, it is to strengthen the United States isolationism which Obama had begun all the same on its two mandates, with for examples the withdrawal of American soldiers of Afghanistan and Iraq or the return of US capital then placed in developing economies which returned immediately in crisis and slandered tax havens (except the State of Delaware). This underlying isolationism rhymes with a protectionism posted on behalf of Trump, aimed at prestigious companies across the Atlantic (Ford, General Motors, etc.) to whom it promises them hell (customs duties raised in case of production outside the United States) or the paradise (massive reduction of the corporate tax). What seems to work for the moment, seen the announcements of relocating in the car industry.

Nevertheless, this taken to the extreme isolationism can lead to progressive retreats. During his campaign, the tycoon of the real estate had made a commitment to make build a wall along the border with Mexico to fight against the immigration, or at least end it seen that he had been introduced by George W Bush in the middle of 2000s and that certain Barack Obama had voted for at that time. But especially, Trump hurled to the white crowd that this wall would be financed by Mexico, what the president Enrique Peña Nieto immediately rejected. Now, an evolution was made because Trump does not evoke any more a financing by Mexico but on the place, a reimbursement of the construction of the wall by Mexico (cf link n°4). A nuance which matters because that means well that the United States taxpayer, including white, will have to pay the bill, while waiting for a hypothetical reimbursement which seems far from being achievable. 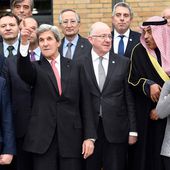 A "stubborn" proposal by President-elect Donald Trump to move the U.S. Embassy in Israel to Jerusalem would involve "very serious consequences" and damage efforts for peace in the Middle East ... 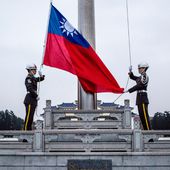 China: No negotiation on 'One China' policy despite Trump remarks

China's Foreign Ministry firmly pushed back Saturday against President-elect Donald Trump's suggestion that the "One China" policy on Taiwan is negotiable, calling it the "political foundation" of ... Mexico will pay US back for wall - Trump - BBC News

The US Congress is exploring ways to pay for a southern border wall, with payment to be sought from Mexico later. President-elect Donald Trump made building a wall, paid for by the US neighbour, a ...