The party which will have most of seats in the House of Commons will need to ally with one or several political parties, in order to have a majority in the Parliament. That's not so obvious for the Conservatives or the Labour.

On May 7th, British voters have to go to the polls for general elections. After that, there will be a new British Parliament, which could be globally different compared with the actual one or its precedents. As it was the case in 2010, for the last general elections, observers of political life in the UK think that the Conservative party, or the Labour party, will not have the majority on its own. So, one assumes that a coalition will be organised, such as it's the case between the Conservatives of Prime minister David Cameron and the Liberal-Democrats of Vice-prime minister Nick Clegg.

Tories and Labour neck and neck

If we look at opinion polls, there is a suspense between the Tories and the Labour. This party, led by Ed Miliband, is considered as the favourite of the election and thus, it could come back to the power, after leading the country between 1997 and 2010 with Tony Blair and Gordon Brown. But these Labour PMs symbolize the submission of the party to the market economy, and Ed Miliband has to show that Labour is more leftist at that time, while attracting the middle-class and the City (finance). That's tricky!

The Tories suffered of their position as the leading party in the government. David Cameron could succeed to stay N.10 in May thanks to the reduction of unemployment, but poverty is growing up since his election, because of austerity policy. The fact remains that both parties are neck and neck and the results should be the tightest ones in the British history, as indicates it to us the graph below.

Labour and Tories collect the major part of voters (between 60 and 70%), but this part is declining because in the past, they represented more than 90% of voters. This phenomenon is common with Spain, and the hatching of Podemos (We can, in English), an extreme left-wing party. But the difference in the UK is the growing influence of the far-right, symbolized by the United Kingdom independance party (Ukip), led by Nigel Farage. We must remain that the Ukip won the European elections, like the Front national (National front in English) in France and accordin to opinion polls, the Ukip could be the third political party of Great Britain, with almost 15% of voting intentions. Quite enough to force the Tories for thinking about a coalition with it.

The LibDems, other member of the actual coalition, is far to keep its 56 seats won in 2010 since electors are disappointed by governing with the Tories and could sanction that political tactic. In the left of the Labour, the Green party is in measure to have deputies in the House of Commons and local parties, such as the Scottish national party (SNP) could be a brake for the Labour because of the Scottish referendum in September 2014. Indeed, Labour supported the "NO", with the government whereas the SNP defended the independance of Scotland. And this election could be a sanction for Labour too. 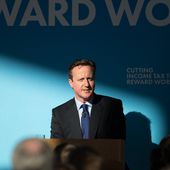 On 7 May, Britain goes to the polls. Voters are deserting Labour and the Tories in favour of resurgent Scottish nationalists and an English version of the Tea Party. The result could spell the end ...

A hung parliament looks increasingly likely as a new poll puts Labour two points ahead, but crucially 20 seats short of a majority. The latest YouGov/The Sun poll for April 7 shows: If this poll is

Who will win the next election, now only a month away? Last month we launched the Polling Observatory election prediction, a new academic forecast to complement the five that May2015 track every ...

In the run up to the forthcoming United Kingdom general election, various organisations carry out opinion polling to gauge voting intention. Results of such polls are displayed in this article. Most