With time, the idea of Brexit grows up and the major part of European leaders becomes alarmed at that assumption. But it could be a good opportunity for the European Union to reinforce it by weakening Britain, in a cynical way (Scotland).

David Cameron is engaged in a race against time with the referendum he promised to the British about the future of the United Kingdom (UK) in the European Union (EU), next june. The British Prime minister wants new agreements with his partners - mainly Germany and France - for his country. For instance, Cameron negociates for a possibility to the British parliament to refuse an European law, whereas treaties stipulate that a law voted by the European parliament has to be applicated at national scale; or a limitation of European migration and social benefits allowed for them.

Back to the future

"History repeats itself: the first as tragedy, then as farce." This sentence of German philosopher and economist Karl Marx in The Eighteenth Brumaire of Louis Napoleon corresponds well to the situation of the UK and its main European partners. David Cameron for Margareth Thatcher, Angela Merkel for Helmuth Kohl and François Hollande for François Mitterrand. The 2010s are a caricature of the 1980s, with Conservative leaders in London and Berlin, and a "socialist" in Paris.

Miss Maggie, as the French singer Renaud nicknamed her, blackmailed with her European partners in the 1980s, except of she obtained agreements about law or about agriculture, with this famous quote: "I want my money back". And she won! She supported all policies for free trade and deregulation within the European community, that went in a neoliberal sense. And now, we have Cameron who uses the same strategy in order to show to the British the great influence of the UK in the EU. The former French president, Charles De Gaulle, warned us about the attitude of the "Trojan horse of the United States" in the 1960s.

For the moment, some opinion polls gave a victory of the Brexit (contraction between Britain and exit), by 52%. This is volatile and the impact of the negociations between London and Brussels is not assumed by polls. But, this is considered as a threat for political leaders in Europe. The French Prime minister, Manuel Valls, repeats that a Brexit could be a disaster for the Union. Why a disaster? Because the UK gives inspiration to the whole continental policy and all the European elites prefered conservatives than leftist leaders such as Alexís Tsípras in Greece. Don't forget, dear lectors, that some countries - whose Germany - wanted a Grexit in 2015.

In fact, a Brexit is an opportunity to change the future of the EU for several reasons:

Finally, the EU has more to win with a Brexit and it should tell: "Britain, if you stay, it would be double". Does Britain's rightwing press really want to bring about Brexit?

Anyone surprised by this opinion poll finding? UK media are regarded by the British public as the most rightwing and biased in Europe. That's the finding of a YouGov poll conducted across seven ... Business has a powerful voice in the Brexit debate

It is 16 June and the referendum on whether Britain should stay in the European Union is a week away. The polls suggest the vote will be close. With careful timing, the Remain camp sends a letter to 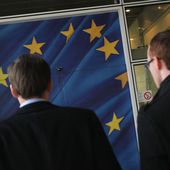 Eurosceptics 'seduced with travel and jobs to vote against Brexit' David Cameron has been accused of "scaremongering" over the claim that leaving the EU could lead to Calais-style migrant camps being established in parts of the UK. The Prime Minister is